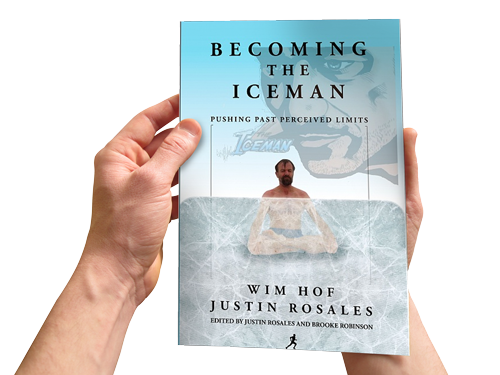 This is my (Simon B) personal account of my 4 days spent with Wimhof, i had previously followed his online course for 10 weeks prior to this retreat. The retreat was held in Melbourne.

I went into this course knowing of Wimhof’s world record ice bath of nearly 2 hours and the fact he had climbed most of Mount Everest and Kilimanjaro in only board shorts.

Reading up some more on Wimhof at the airport i learnt of 22 world records including dessert runs with no water, the longest 1 finger hang and the longest under ice swim, this got me super excited but also a little nervous..

The gathering at the airport of all the attendees included a wide range of back grounds from extreme adventurers, Boxers, hippies, professionals, those with ranging illnesses, a few gym owners and everything in between. I was excited to be surrounded by such a diverse range of people and wanting to learn why these people were here and what they were wanting to achieve.

Meeting Wimhof you can sense a feeling of happiness that people are turning up to listen and learn his techniques. Previously laughed at and dismissed by the medical professions and the media, he can sense the time is coming where people will actually listen and he will be able to make a difference to the world. He believes we all have the power within and he knows he can teach us how to tap into our own potential!

We started the week by proving that our PH levels could be changed through breathing techniques alone, why would you want to do this you might ask?

The body is always fighting to stay neutral and in today’s society most of the population is spending a long time working against being in the acidic range due to a number of factors that could include poor food / drink quality, toxic air, shallow breathing from high stress plus many more factors. Acidic levels and the burden on the body to neutralise could contribute to sickness and disease.

So 20 of us took to the bathroom with PH sticks and tested our PH Levels – all 20 of us produced a yellow to green colour for the test showing we were all in a slightly acidic state.

Wimhof breathing – our next 20mins involved deep inhalation and slow exhalation with a hold on exhalation after every 30 breaths, the hold was for as long as you can. This was repeated 4 times and we head back into the bathrooms to recheck.

All 20 of us had moved to the other end of the spectrum Alkaline with our urine producing a blue colour on the strip.

This little test had me.

I was in and ready to consume anything the “guru” had to say for the next four days..

Next came some more breathing techniques, and the horse stance which was a mixture of squat hold, tai chi, capoeira and much more advice on how to tune into your body.

As the afternoon came in the dreaded ice bath was revealed and 1 tonne of ice was ordered and poorer into the ice bath… With out much coaching we were thrown into our first challenge of 2 minutes in near freezing ice. We got through it with a little help from breathing, singing and shivering but with news that we would be doing 10minutes before we left I wasn’t full of confidence.

Many of the participants had discussed their reasons for attending many had serious personal challenges they were wanting to overcome asthma, arthritis, MS, mental issues, migraines, depression, cancer just to name a few.

Is this at all possible i thought? Well Wim was certain that many answers to your wellness lie within he would often state that we have barely tapped the potential of our own brain as we often look for answers outside through medicine and external factors even outside of the world.

So do they say isn’t possible?

Autonomic nervous system – With autonomic being the key word there are many processes that happen in the body without us actually having control they happen automatic e.g. digestion, adrenaline, PH regulation, core body temperature, Hormone release.

Wimhoff has diproven this over and over and not only can he control these systems but he can show everyone the way to tap into their own physiology.

So why ice bath?

The ice bath may seem like a crazy thing to do but looking back the challenge of sticking through your bodies first response of being in a “life threatening” situation is to change the situation. Its getting cold i will go somewhere warmer or put more clothes on, in the ice bath your bodies first reaction is get out get OUT! but then you need to go to your bodies next line of defence internal changes protect the main organs with warmth, the capillaries will start to open and close more efficiently and then somewhere in the madness of sitting in this ice bath you find the ability to stop yourself from shivering, send blood flow to the extremities and find a sense of calmness and control.

You are back in tune with your mind and your body, no longer thinking about whats happening at work or who liked your instagram photo but in the zone and in control.

This ability to tune into our mind and body with precision lead to the breathing techniques becoming much more effective we could now not only pull more oxygen into the body but were starting to get the ability to move that oxygenated blood where ever we wanted to.

All of a sudden we felt the power was within ourselves so we took to the breathing with more venom and looked forward to the ice bath sessions going from 2 – 4min to 8min and then to 10minutes, even adding extra sessions just for fun.

The breathing techniques became more advanced and included holding our breathe out for upto 4minutes and completing over 50 push ups whilst exhaling all breath. We discovered ways of changing techniques to clear the mind and also release adrenaline.

So what is possible with this and will it make it mainstream?

Wimhoff is very open to what is possible and there are many university studies now testing these theories and possibilities but even more impactful is the worlds biggest stars Kelly Slater, Beyonce, Mark Zuckerberg now adopting these methods lead me to believe this could make a huge impact on the world.

I will personally continue to practice this method as for me being following the plan for 3 months i have slept better, trained better have had much better mental clarity and my goal now is to use the method to improve my memory and use it with athletes to improve their oxygen consumption and concentration for performance.